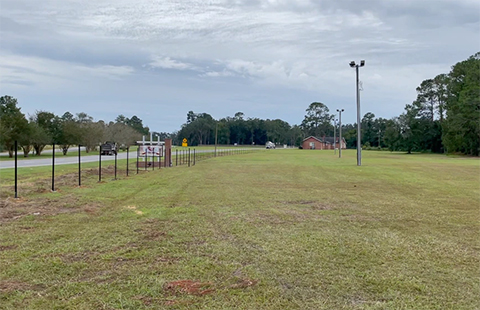 QUITMAN, Ga. (WALB) - The City of Quitman is celebrating a new memorial park. The park honors the lives of three high school football players killed in a tragic car accident in 2013. "BC3," jersey numbers, wings, a football stadium and three crosses, all representing and honoring Jicarre Watkins, Shawn Waters and Johnie Parker. The sign for the memorial park on South Court Street was recently unveiled.

"It's a beautiful feeling. I'm so honored they honored our kids," said Agnes Kimbrough, Watkins' mom.

Kimbrough said it was a collaborative effort between the city and the victims' families. Quitman Mayor Nancy Whitfield Dennard said when the land was purchased in 2017, they had plans to do something recreational. In 2019, they named it BC3 Memorial Park. And then, the pandemic hit and paused plans. When City Manager Raphel Maddox started, his first task was bringing this park to life.

"I think it's needed. It's part of the grief process because grief is something that is continuous. And I think it's much needed and I think having a place to come and others just to gather, and like I said, when you come, you're constantly reminded. We never need to forget our children," said Dennard.

The city plans to add benches and other recreational activities. They're accepting community input and ideas. Kimbrough said she's going to be a frequent parkgoer.

"It's healing actually for myself. I can be a tenant of this park like I was at the tree," said Kimbrough.

The city and families are thankful there's now a place they can come and memorialize the lives of those lost and remember what they meant to the community.

"It's a good feeling to know not only will they live on here, we can always come out here and say 'he's always around, not only him, but Johnie and Shawn also,'" said Kimbrough.